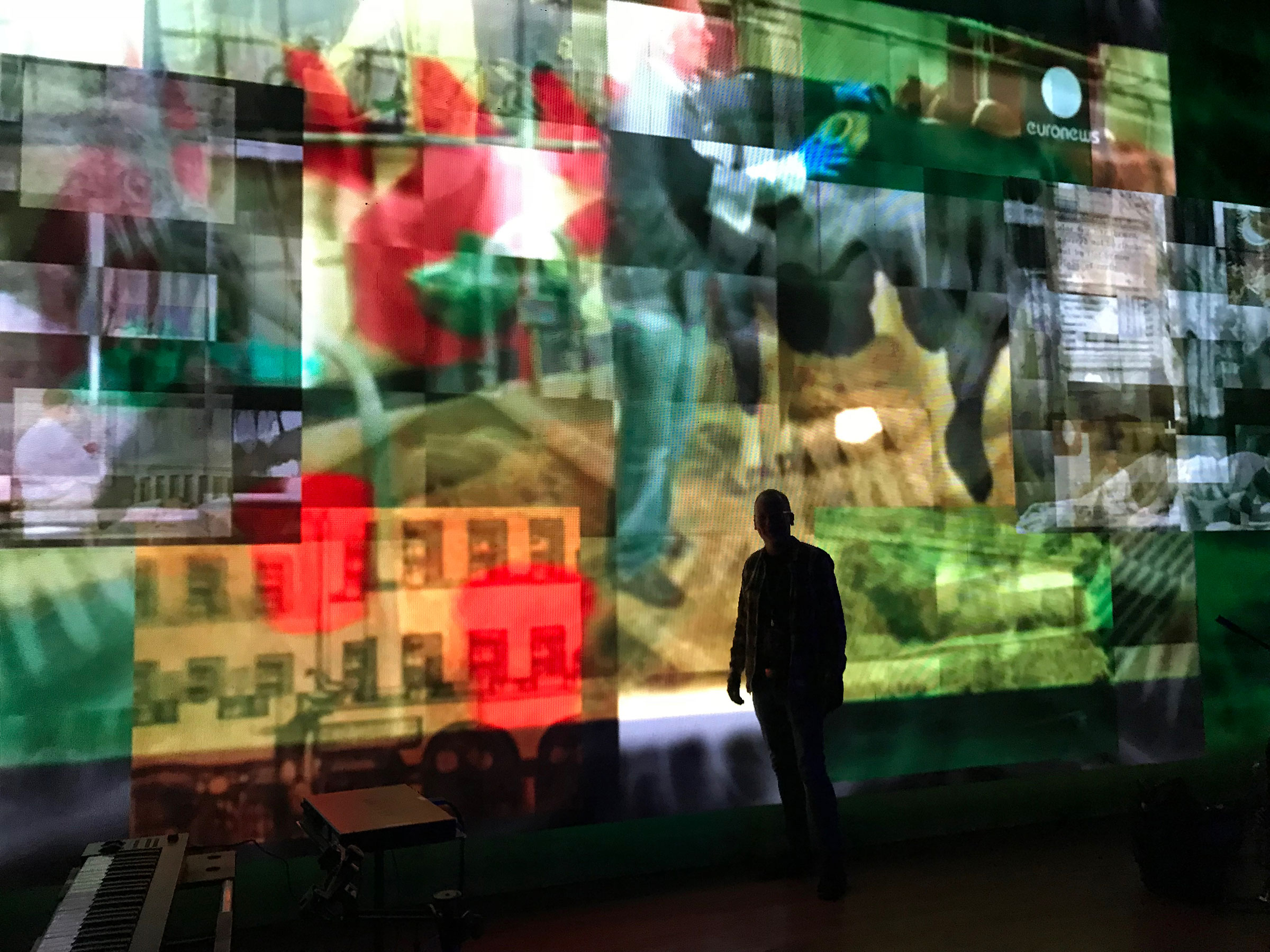 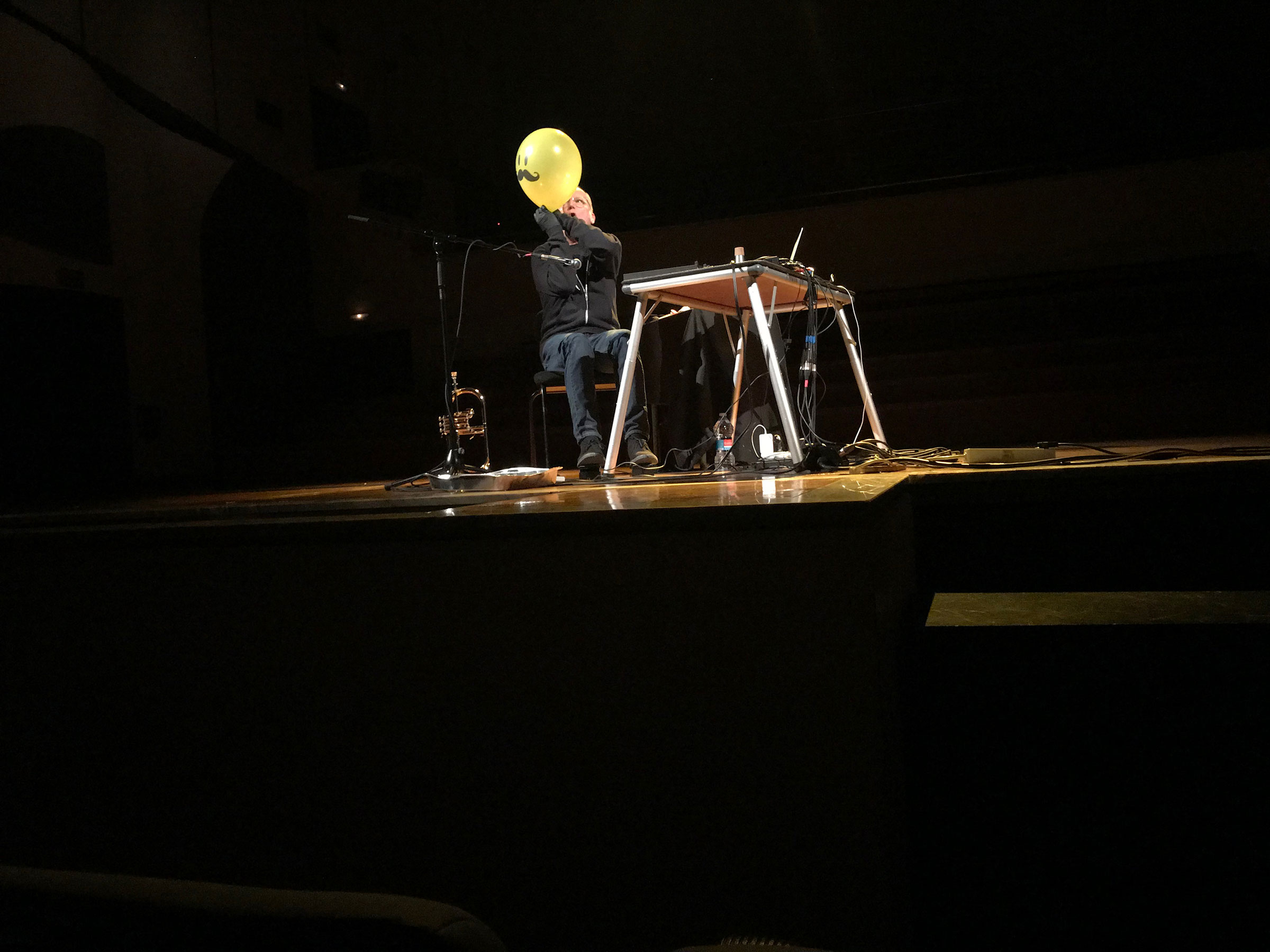 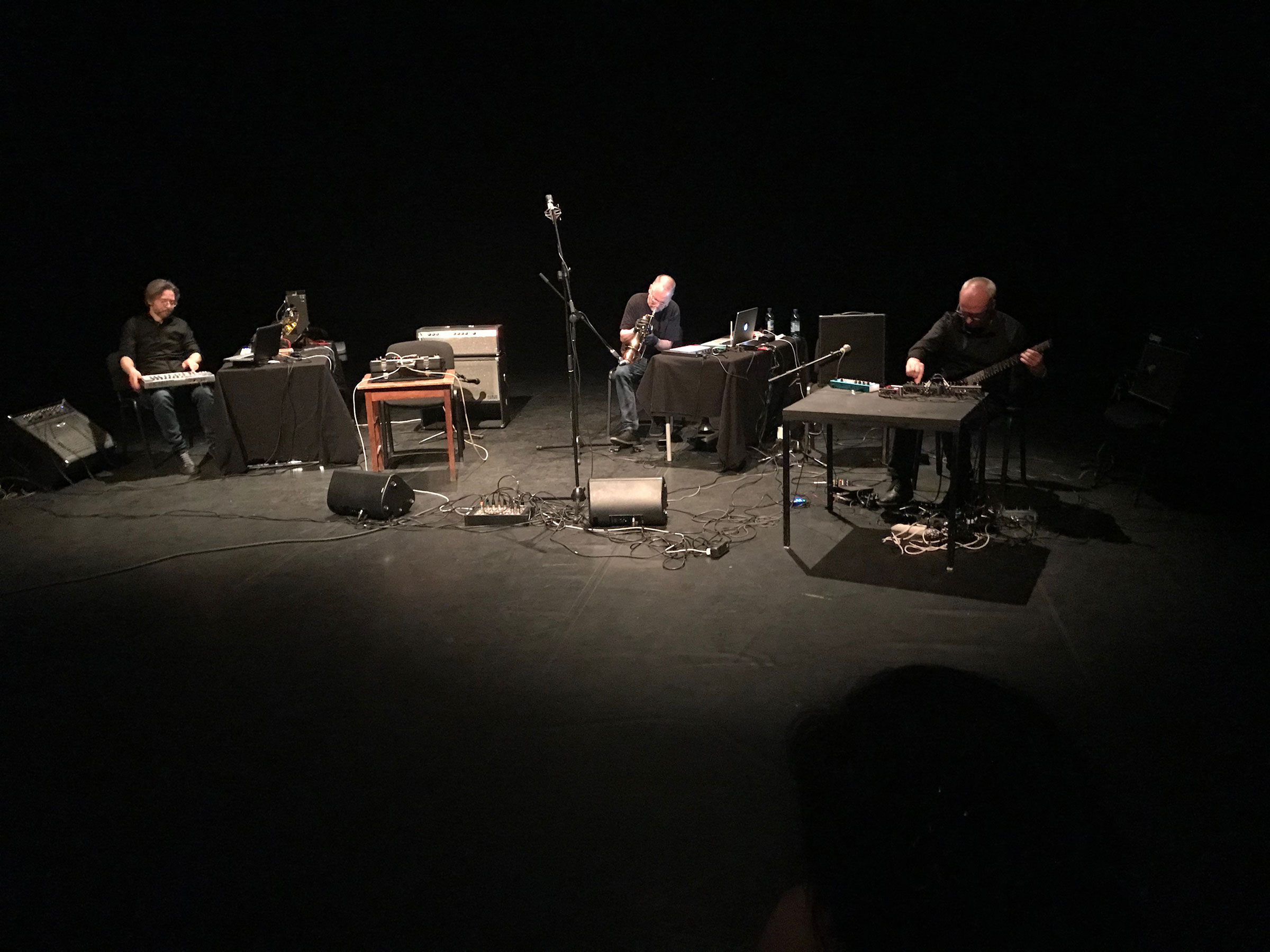 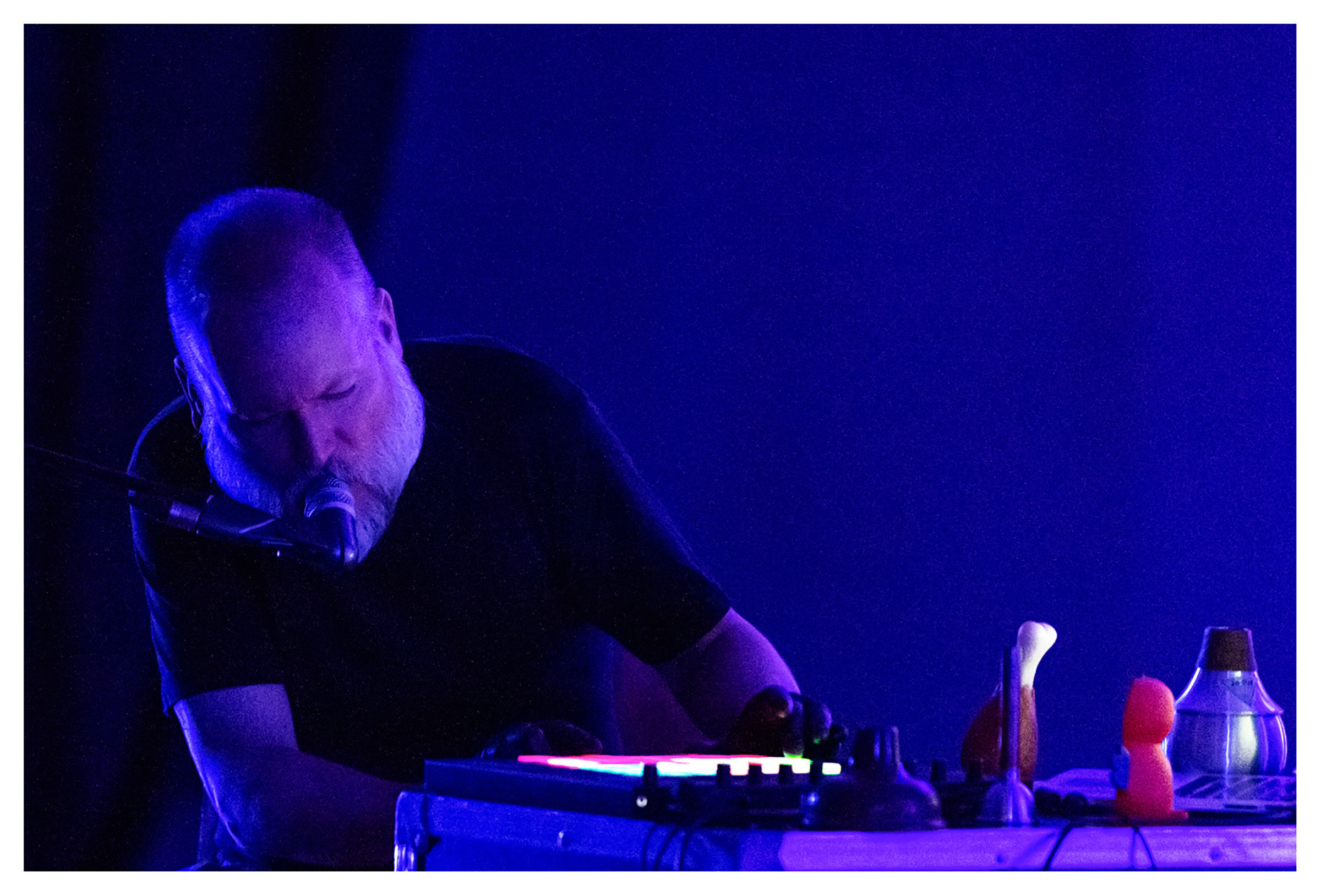 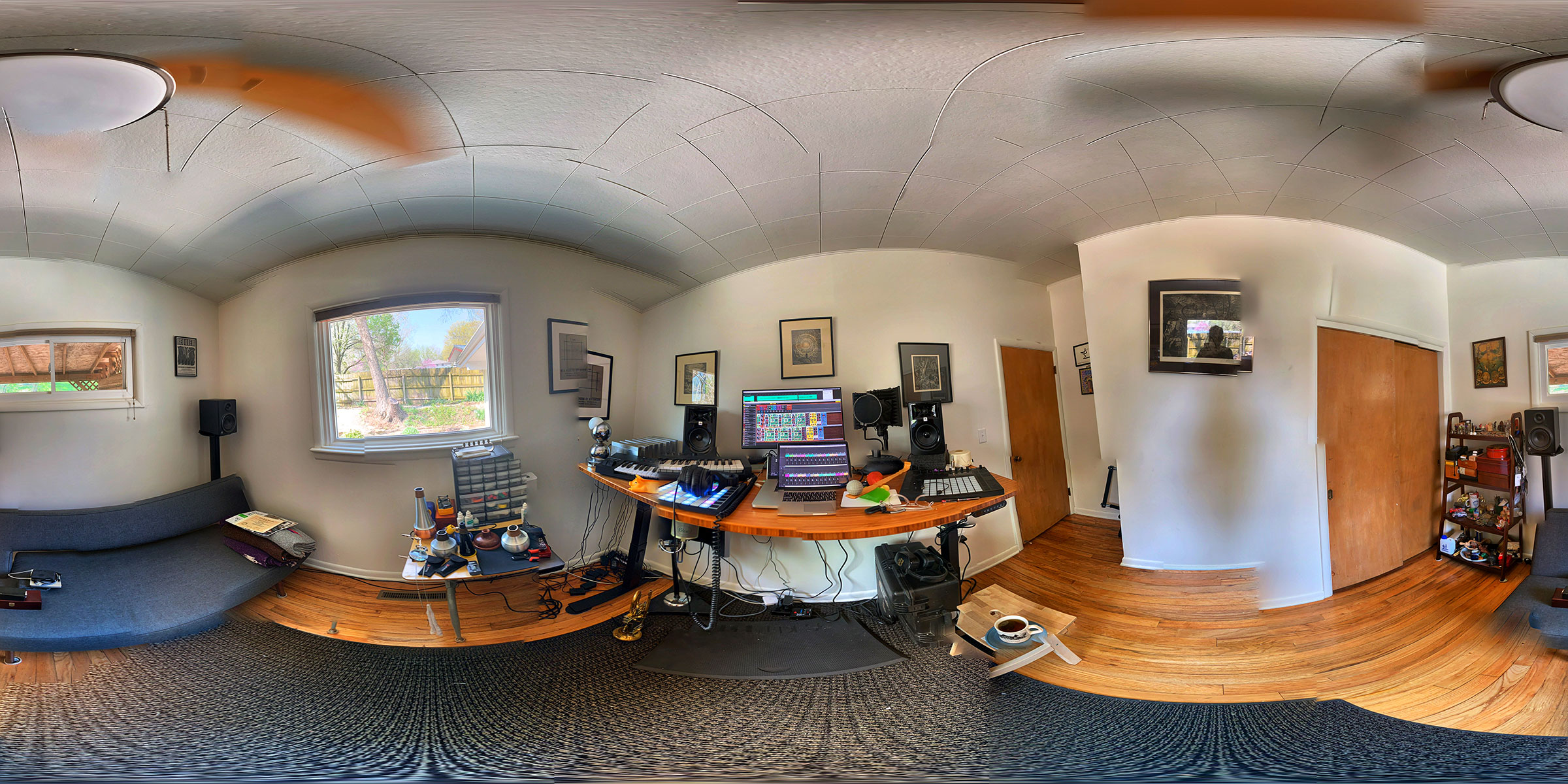 Personal Studio in the time of Covid 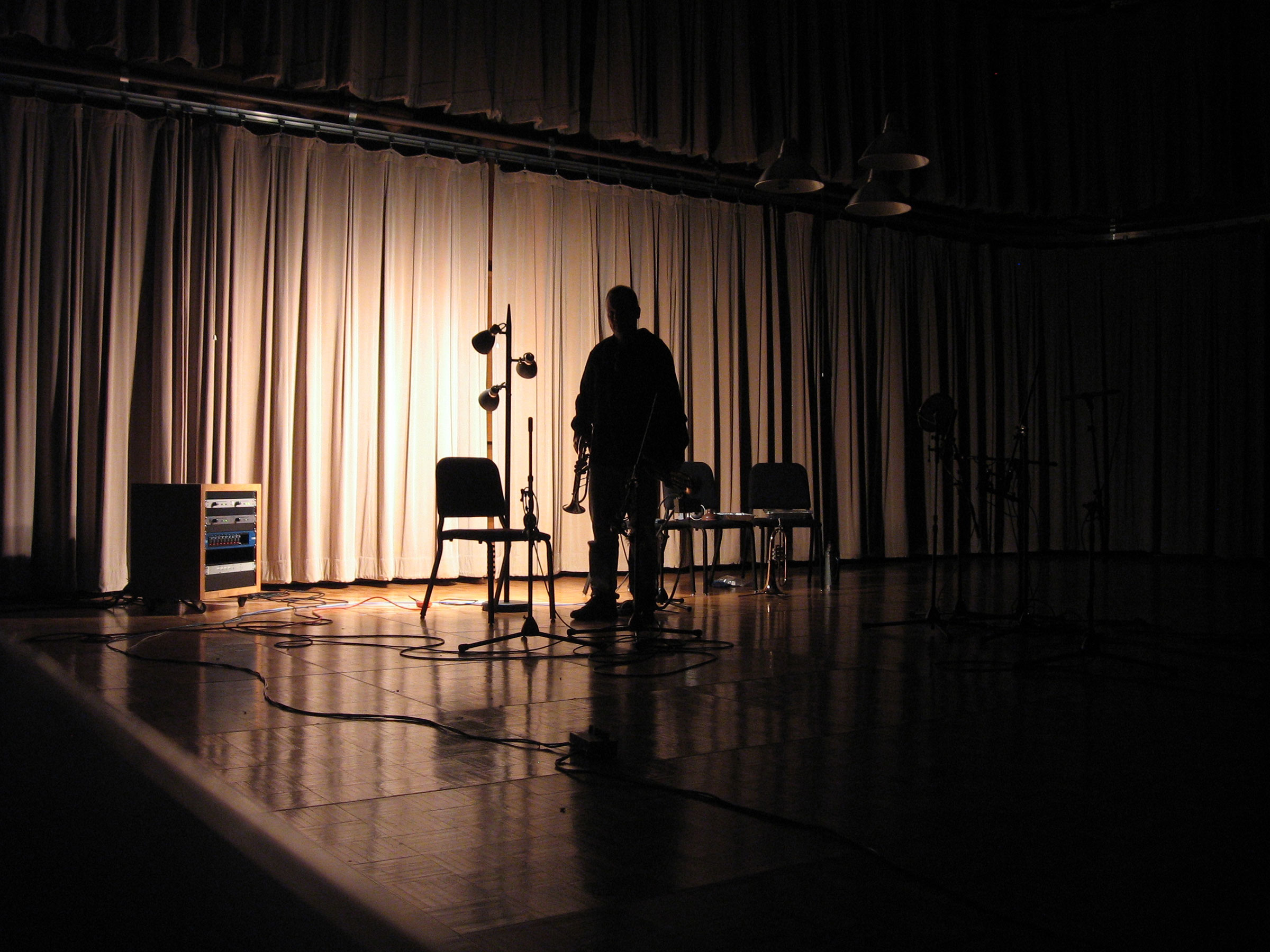 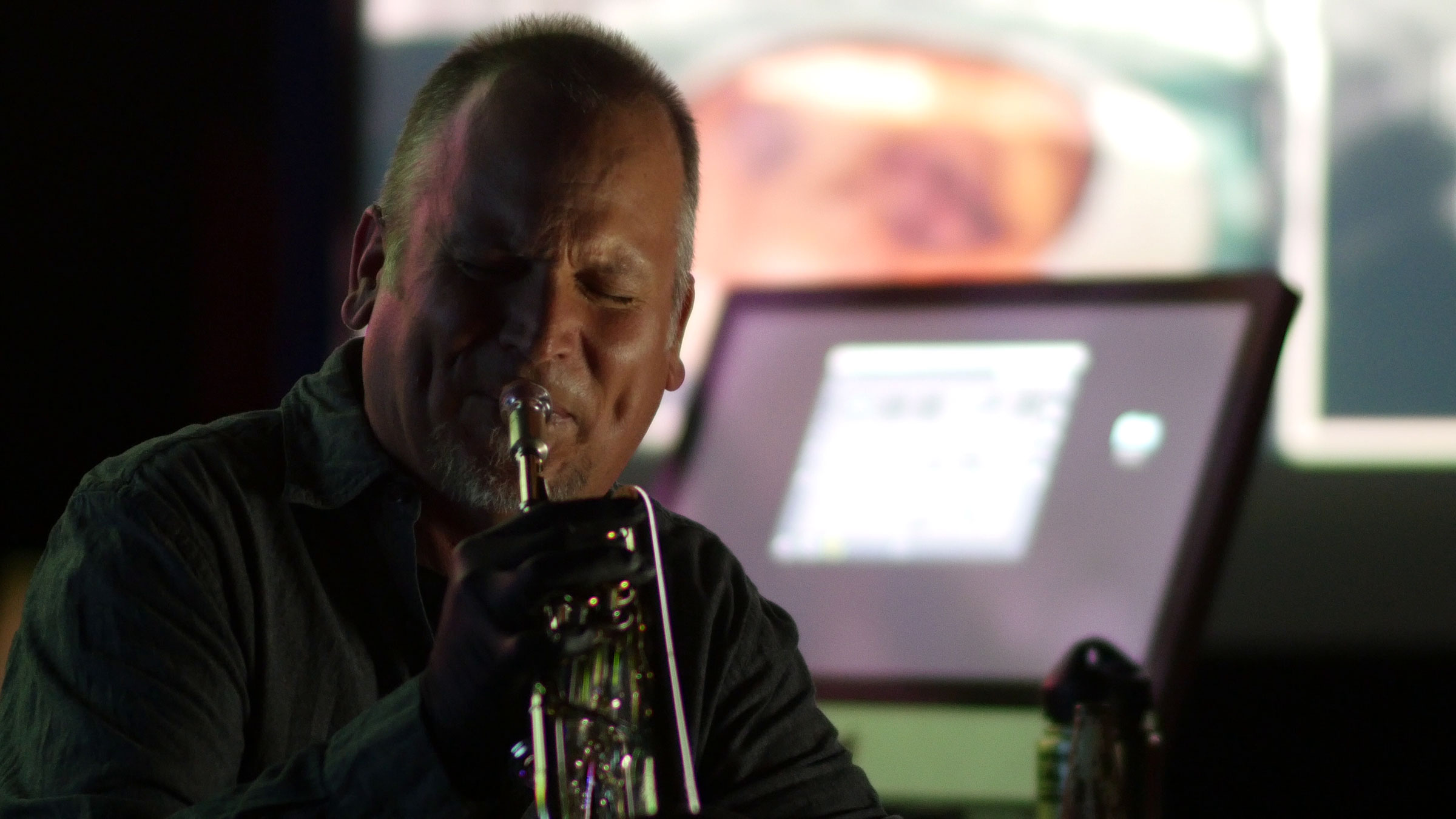 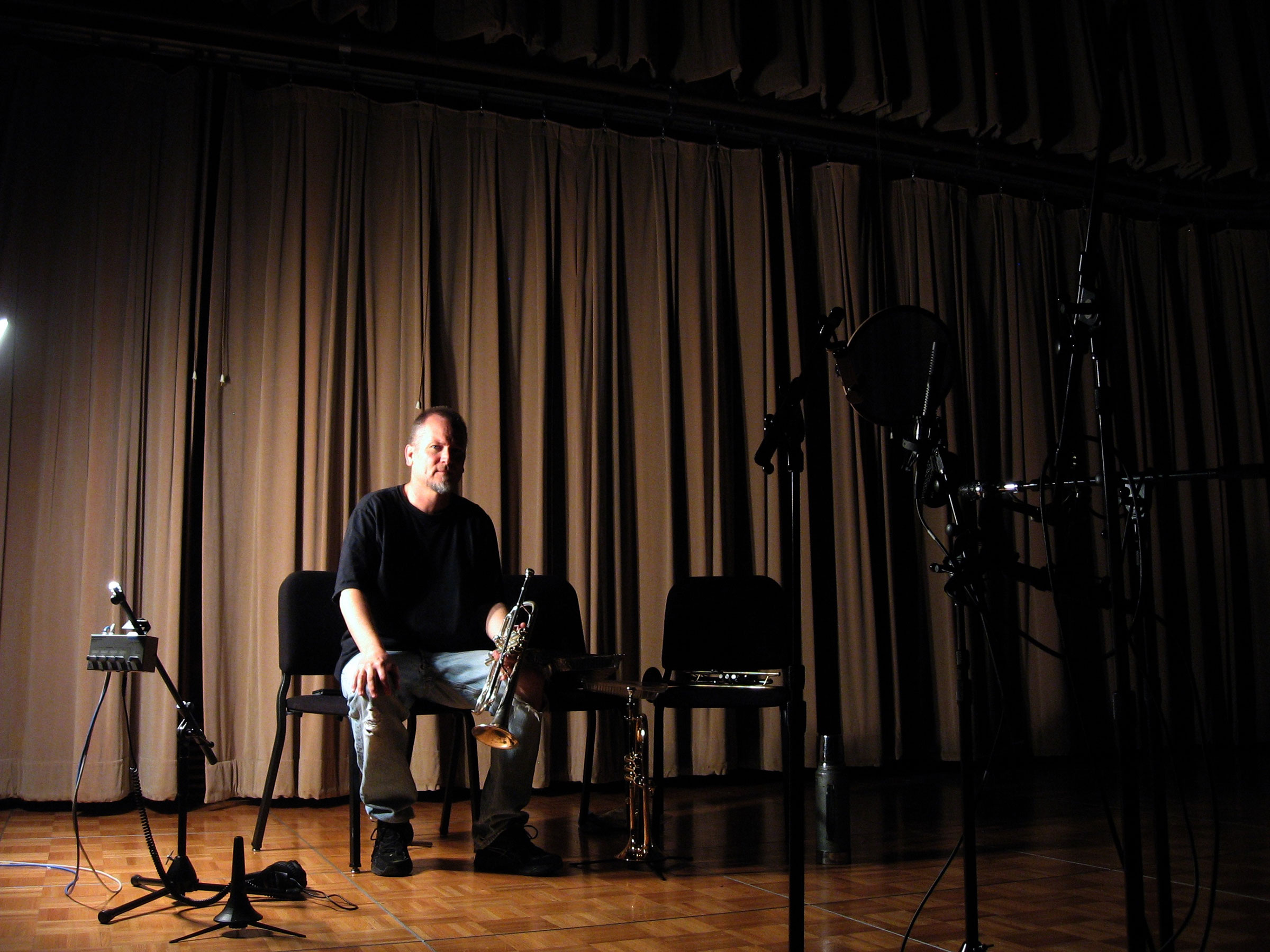 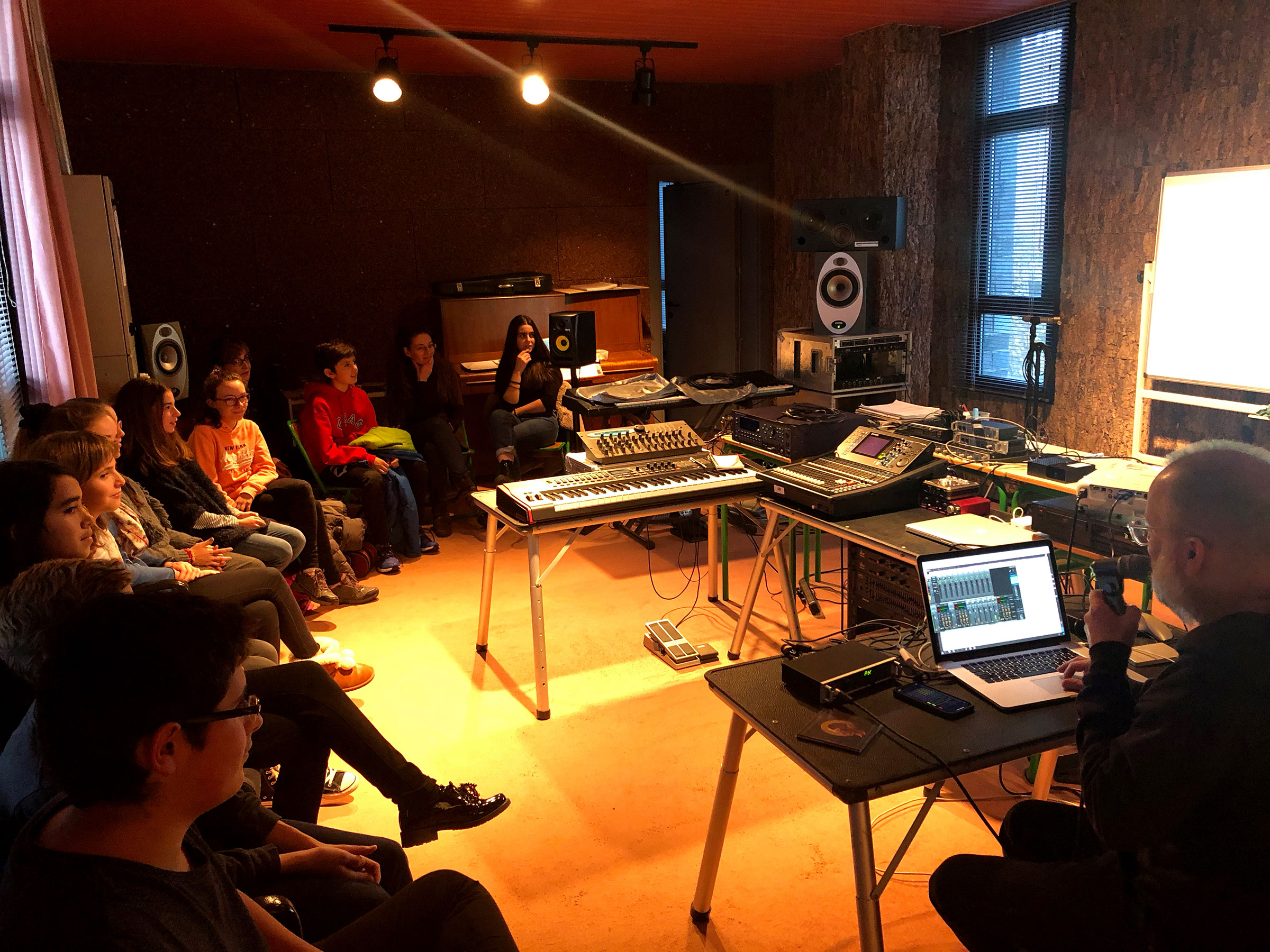 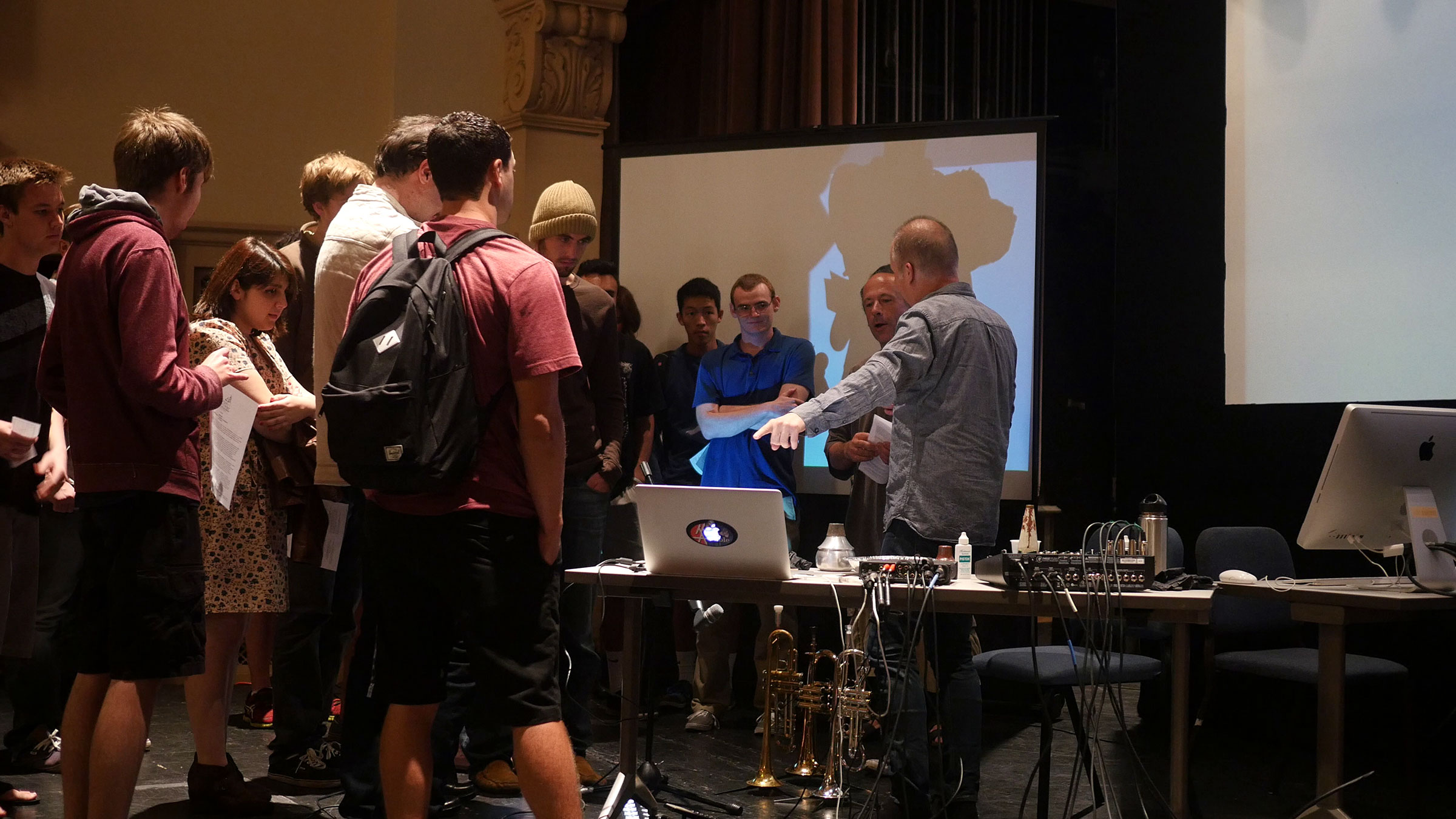 Jeff Kaiser’s solo performance was “a manic, hallucinogenic joyride through time, space and tonal distortions. He took some of the extended techniques of Lester Bowie and Bill Dixon, and stretched them past the breaking point. He would bend a note, transpose it to an impossible octave, and then send it spinning around the room like a remote-control airplane...He’d sample a phrase and distort it beyond recognition, causing it to ricochet around the space in pink and white noise reiterations. Kaiser’s set was unbelievably creative…”

[A] recurring highlight of each MOXsonic festival has been a performance by the Choir Boys, a duo consisting of Jeff Kaiser on trumpet and electronics and saxophonist Andrew Pask. This year as part of the Friday Nightlife concert they performed with Len Lye’s bizarre, hand-drawn 1929 film Tusalava. The results were mesmerizing and disturbing…I was glad space was made for this because live performances by Kaiser are not to be missed.

Jeff Kaiser is a trumpet player, composer, conductor, media technologist, and scholar. While classically trained as a trumpet player and composer, Kaiser now takes an integrative, systemic view that involves his traditional instrument, emergent technology (in the form of custom interactive/generative software and hardware interfaces), space, and audience: all being critical and integral participants in his dynamic and adventurous performances. He gains inspiration and ideas from the rich history of experimental improvisation and composition, cognitive science, and the timbral and formal affordances provided by combining traditional instruments with new and repurposed technologies. The roots of his music are firmly in the experimental traditions within jazz, improvisation, and Western art music practices. Kaiser considers his art audio-centric, but he also works with live video, tracking, and interactive and generative technologies.

Embracing the idea of being an artist/technologist/scholar, Kaiser earned a PhD in Integrative Studies (music) from the University of California San Diego. Kaiser's output falls into these three areas—creative, technological, scholarly—with each area informing the other. He is driven by a strong desire to combine the artistic exploration of ideas, concepts, and practices on the creation and production of music, with what scholar, professor, and ethnomusicologist Timothy Rice refers to as “…word-based, reasoned discourse about music.” In doing this, Kaiser acknowledges a relationship that has long existed between artists, technologists, and the scholarly/intellectual pursuits; and recognizes that these domains enrich and inform each other while providing frameworks that encourage innovation and multiple ways of knowing, examining, communicating, creating, and producing sonic art across genres, styles, and differing creative outcomes. As an example of this interplay, his work as an ethnomusicologist researching musicians who improvise with new technologies led to his developing a specific definition of improvisation; this definition then led to his development of a software-based machine-improvisation algorithm informed by that definition; and this algorithm is now used in his software for creative projects from solo works to commissioned compositions.

As an artist/technologist/scholar Kaiser has maintained a robust and active agenda in all three areas. He has performed concerts, given master classes, and presented his research in Austria, China, England, Estonia, Germany, Mexico, The Netherlands, Spain, Sweden, and throughout the United States. Even during the pandemic, Kaiser has continued to perform and present at festivals and universities remotely from his personal studio.

In addition, Kaiser is a tireless promoter of creative and experimental music:

He is the founder and director of the critically acclaimed pfMENTUM music label. pfMENTUM has released around 150 full-length recordings featuring over 560 musicians, artists, engineers, poets, and more. pfMENTUM’s focus is on music that falls between-the-cracks of genres, from the avant-blues of The Mentones, free-jazz/rock of pianist/organist Wayne Peet (with Nels Cline and G.E. Stinson), experimental vocalist Bonnie Barnett, electro-acoustic experimentation, and Kaiser's own projects from his large ensemble (with and without choir), electro-acoustic duos, trios and more.

Kaiser was the founder and director of the internationally-acclaimed Ventura New Music Concert Series (1990-2007) featuring a combination of regional, national, and international creative artists.

He is the co-founding director and currently the main coordinating director for MOXsonic (the Missouri Experimental Sonic Arts Festival). MOXsonic features music with a focus on interactive technology, gaining critical praise from MIT’s Computer Music Journal, among others.

In addition, Kaiser has served as a consultant with administrators and directors with other festivals, concerts, series, and events.

Kaiser has maintained an active international career, performing at prestigious events such as Musicacoustica at the Central Conservatory of Music (Beijing, China) where he also served as a jurist for an international composers competition, the International Society for Contemporary Music World Music Days (Tallinn, Estonia), Bernaola International Music Festival (Bilbao, Spain), the Vision Festival (New York), the Festival of New Trumpet (New York), the grand opening of the REDCAT Theater at Disney Concert Hall (Los Angeles), as well as at concert halls, clubs, universities, colleges, music conservatories, and art galleries in Austria, China, England, Estonia, Germany, Mexico, The Netherlands, Spain, Sweden, and throughout the United States.

Kaiser composes music for a variety of ensembles—from large to small, instrumental to vocal, acoustic to electronic—employing a hybrid notation of traditional and graphic elements. His large ensemble, The Jeff Kaiser Ockodektet, is a twenty-plus piece group that includes brass, percussion, strings, woodwinds, as well as Theremin, modular analog synth with laptop, heavily electronically effected and prepared contrabass guitar and, on occasion, choir. A performance of the Ockodektet was selected as the jazz concert of the year in the San Diego Reader. He has also performed on major television shows and films.

Kaiser has received numerous awards, grants, and commissions for works including choral music with electronics, a large-scale multi-building improvisation-based electro-acoustic work, several chamber operas, an oratorio, a video/music installation in a decommissioned women’s prison and performances on television and film scores. Commissions include the Ojai Camerata and California Lutheran University, to name a few. He has received eighteen ASCAP Plus Awards, awards from universities and colleges, fourteen Individual Artist Fellowships from the City of Ventura, three Forum of the Arts Grant administered by the Ventura County Museum of History and Art, several Subito grants from the American Composers Forum, and more.

As a conductor, Kaiser has directed many ensembles with a focus on improvisation-oriented groups, his own operas and large ensembles, and is a former music director for the Ojai Camerata which is a vocal ensemble specializing in early and contemporary music.

Jeff Kaiser has a wide-ranging background as an interdisciplinary creative practitioner who authors, develops, and uses his own software and hardware interfaces for live digital signal processing in both audio and visual domains. In addition, he has a long history of creative collaborations in the arts: working with dancers, poets, actors, visual artists, historians, as well as musicians and more.

Specific ongoing research interests in software development include improvisational approaches to audio spatialization involving spectral and pitch-based analysis, the use of video tracking and other gesture-based interfaces, interactive and generative software tools: all with the goal of helping performers escape being beholden to a computer screen while on stage or in the studio. Jeff Kaiser has had five different artist residencies at STEIM (STudio for Electro-Instrumental Music) in Amsterdam, The Netherlands to pursue these research goals at one of the leading institutions for electro-instrumental research.

Kaiser has several duos he works with that each have a focused and unique approach to electro-acoustic improvised music. The Choir Boys (with Andrew Pask) was inspired by listening to Bobby Bradford and John Carter recordings together, KaiBorg (with David Borgo) grew out of a shared desire to create custom hardware and software that privileged improvisation, The Desert Fathers (with Gregory Taylor) developed out of a performance opportunity but quickly moved to ideas of shifting foreground/background within complex improvised drone environments, and Made Audible (with Trevor Henthorn) works with the sonification of data sets from political to scientific and has led to a suite of generative plugins for Ableton Live and Max/MSP that work with probability and large data sets. You can find these plugins (KaiGen, short for Kaiser Generative) in the software section of this website.

Kaiser also develops and freely shares his work in the programming environment Max from Cycling ’74, from his popular KaiserLooper (live looping software) to his I-Ching patches and more. Three of his software packages for controllers have been published by Cycling ’74 and are included in their official package manager for the main distribution: jk.push (for interacting with Ableton’s Push 2 controller), jk.lpx (for interacting with Novation’s Launchpad X), and jk.softstep (for interacting with Keith McMillen Instruments’ Softstep 2).

Pedagogy and the changing world of music technology is an important area of interest for Kaiser. As a champion of removing barriers of entry into professional quality audio production he has created Why Reaper?, a site devoted to arguing in favor of access to tools for music production, and against gatekeeping embedded in ideas of “industry standards” and more.

In addition to his own artistic work as a music technologist, Kaiser is a consultant for a wide variety of music and visual art practitioners: from experimental musicians to EDM and other popular musics, assisting in designing audio signal processing strategies and designing and implementing interactive video tracking and projection.

Finally, as a producer—as well as recording, mixing, and mastering engineer—Kaiser has been personally involved with the production and release of hundreds of recordings from experimental to popular.

Jeff Kaiser is currently working on two book projects. The first is Loopers: Aesthetics, Technologies, and Creative Practitioners, which will be co-authored with Gregory Taylor. The manuscript will have three sections: An exploration of the aesthetics of repetition in music, ethnographic information from people that use loopers, including their ideas/conceptions of the role of technology in their art, and software examples of different types of loopers used in musical performance and production. We are currently collecting participants to talk about their use of loopers and more, please go to jeffkaiser.com/loopers/ for more details.

The second book project is titled, Improvising Technology: Virtuosity, Machines, and Interagency. This work provides an ethnographic examination of contemporary musicians who use new, repurposed, and reinvented electronic technologies—along with a critical examination of how these musicians conceptualize their practice. In this research project he examines changing notions of agency, instruments, virtuosity, and how artists, audiences and critics construct what is valuable and desirable in these emerging fields. He conducted approximately thirty interviews with notable artists/technologists including guitarist Nels Cline of Wilco, Peruvian (now New York-based) avant-garde turntable performer Maria Chavez, trumpeter and composer Wadada Leo Smith, and Robert Henke, one of the original authors of the immensely popular software package Ableton Live. Beyond mere documentation of how these creative individuals configure technologies for their own purposes, the manuscript highlights how technologies can also configure musicians and musical communities by affording specific ways of creating sonic and social value. It is his goal to edit the video interviews into an accompanying documentary.

At his current position, Kaiser has helped to develop the Master of Arts program with a pathway in music technology, has added new courses to the catalog for the graduate program, and updated and developed new courses for the undergraduates.

In addition to his PhD, Jeff Kaiser holds a Bachelor’s Degree in Music Composition from Westmont College and a Master of Music in Choral and Orchestral Conducting from Azusa Pacific University.