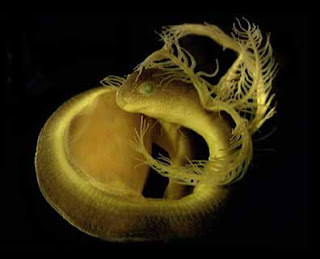 The above photo from here.

Some of you may know that I’m a fanatic for tea and I keep abreast of tea news with my website http://www.newcreative.com/tea/.

Having enjoyed different teas from the Makaibari tea estate I was pleased and intrigued to see this news:

KURSEONG, July 28: A rare animal ‘caecilians’ has been discovered in Makaibari Tea Estate near Kurseong. The animal belongs to the amphibian family. It is being claimed that the animal was sighted after a gap of over 100 years.

The creature found for the first time in 1881 at Rangliot Valley in Sikkim was named as Icohthyophis Skkimmennis. Robin Suyesh, a student from Delhi University made the discovery in the tea estate recently.

A Caecilian is pretty interesting. (I’ll sidestep jokes about “The Godfather” et al.) Among other things, according to Wikipedia, one of the species has babies that eat fatty tissue off their mother, which she then regenerates so they can eat her some more. This “is the only currently known instance of dermatotrophy, or deriving necessary nutrients from the consumption of skin.”

Still, I highly recommend Makaibari Estate tea…you can find some at the Strand Tea Company. Although I tend to do much of my tea ordering from The Tao of Tea, as I love the variety of pu-erh teas they have, I can recommend the Makaibari (green, in particular) from Strand.