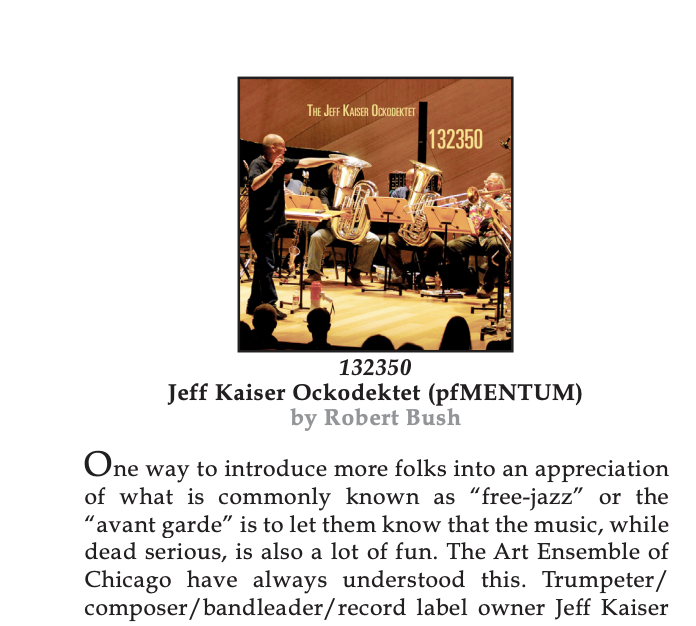 So lovely to wake up to a positive review of the Jeff Kaiser Ockodektet!

One way to introduce more folks into an appreciation of what is commonly known as “free-jazz” or the “avant garde” is to let them know that the music, while dead serious, is also a lot of fun. The Art Ensemble of Chicago have always understood this. Trumpeter/composer/bandleader/record label owner Jeff Kaiser (who turns 62 this month) is another who has frequently woven humor into his personal aesthetic and the raucous applause that begins 132350 is the audience’s reaction to his entering the hall wearing an outrageous outfit. After tossing a bag full of noisemakers into the crowd, he sat at a pump organ, grabbed a megaphone and spoke/sang the Allen Ginsberg poem “Father Death Blues”.

Then things got serious. The title of the album has a numeric explanation: it should read “13”, “23”, “50”, meaning 13 pieces for 23 improvisers for the occasion of Kaiser’s 50th birthday. It begins with soft, lighter, random tones before the low brass of two tubas (Jonathan Piper and William Roper), two trombones (Michael Dessen and Michael Vlatkovich) and the leviathan contrabass saxophone of Vinny Golia begin a stuttering series of blatts that could easily blow the sheet music off the stands. Bassist Mark Dresser then emerges with myriad sounds only he could conjure before trumpeter Kris Tiner takes the baton. Dessen and Vlatkovich proceed with a wicked trombone essay then Brad Henkel wraps things up with a balloon, a trumpet mouthpiece and a ton of chutzpah.

Golia’s contrabass saxophone also leads off the following section and it is worth noting that of the half-dozen or so multi-instrumentalists who can afford one, he seems to transform the instrument past the novelty and into a purely musical dynamic. Many times the orchestra volleys huge dissonant chords, sounding like Bob Graettinger’s City of Glass (performed by Stan Kenton) laced with copious doses of LSD. Throughout, there are multiple opportunities for the upper-echelon of the Southern California free improvising community to strut their stuff.

And, one cannot deny the power of Kaiser’s twisted sense of humor. To close out the show, he returned to the pump organ to croon out a hilarious version of the 1962 Skeeter Davis pop tearjerker “End of the World”, with musical saw accompaniment by bassist Jim Connolly to the crowd’s approval. What a delight to see this finally surface long after Kaiser’s big 5-0 celebration.