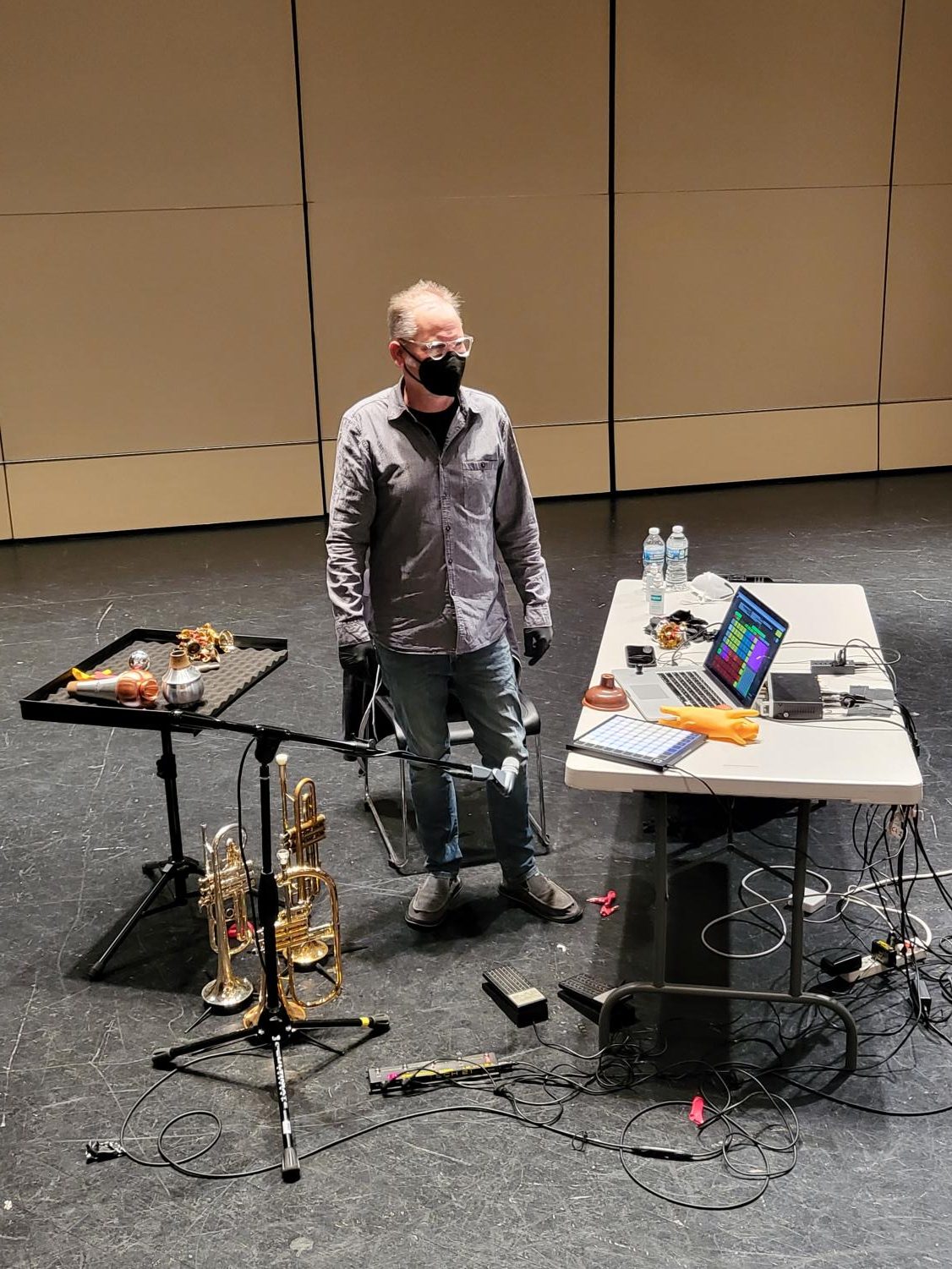 “The lights dimmed and he put on his black nitrile gloves before bringing his instrument to life with layer after layer of sound distorted from mere noise into a form of all-encompassing music, building and swirling around the listener in ways impossible for traditional musical pieces or ensembles.”

Outside the Box performance pushes the boundaries of music as art

Photos and Article by William Box

Outside the Box performance pushes the boundaries of music as art
By William Box , Staff Reporter|March 30, 2022
William Box | wbox@dailyegyptian.com

Jeff Kaiser stands with his “instrument,” a collection of trumpets, bells, balloons, a rubber chicken and assorted technology.

Jeff Kaiser stepped onto the stage, smiling at the audience before taking his seat at his “instrument,” a collection of trumpets, bells, effects pedals, speakers and computer components.

The lights dimmed and he put on his black nitrile gloves before bringing his instrument to life with layer after layer of sound distorted from mere noise into a form of all-encompassing music, building and swirling around the listener in ways impossible for traditional musical pieces or ensembles.

The School of Music at Southern Illinois University (SIU) hosted a performance by Kaiser, a musician, music technologist and professor at the University of Central Missouri on Friday, March 25 in the Shryock auditorium. The performance was attended by approximately fifty people, including students, faculty and community members and was open for free to the public.

The performance consisted of approximately an hour and a half of improvisational music utilizing a variety of sounds ranging from traditional trumpet tones to random mouth sounds and balloons inflating and exploding being mixed through a synthesizing software and oscillating through a series of speakers surrounding the audience.

“For me, it’s totally captivating and compelling to work with technology over the past 40 years,” Kaiser said. “When I was introduced to it from some professors I worked with in the early 80’s I kind of fell in love with it.”

Kaiser has been performing with the latest synthesizing technology consistently over the past four decades and has watched as it has grown increasingly complex and capable of manipulating sound in more interesting ways.

“I definitely think of myself as a textural improviser. I’m creating different types of layers and improvising with them,” Kaiser said. “My favorite thing about the technology now is its ability to surprise me and how the technology has its own agency in the performance.”

Kaiser’s performance was the second to last in a series of performances put on by the School of Music during its Outside the Box Music Festival, which aims to introduce open-minded audiences to new and sometimes experimental forms of music, according to Casey Ginther, a retired SIU professor who helped to found the festival 15 years ago.

“When I was here maybe five or six years, I decided we needed our own new music festival because we were doing a lot of new music activities but sort of spread throughout the year,” Ginther said. “So I thought if we did a whole lot of them in one solid week it would really make a bigger splash.”

Ginther said, since her retirement, the Outside the Box Festival has been organized by SIU professor Chris Walczak. She said, as the years have progressed, the audiences have maintained a consistent size.

“The audiences have always been enthusiastic. They’re not huge, there are a certain people, I think, who are attracted to the unusual in anything and especially in music,” Ginther said. “Especially if you’re a musician or music student playing the same pieces that are centuries old, sometimes it’s just great to hear other stuff and have your ears expand a little bit and stretch your brain.”

Eric Mandat, a music professor at SIU and professional solo and ensemble clarinetist, helped to bring Kaiser to perform at the Outside the Box Festival. He and Kaiser have been friends throughout their careers in performance and academia.

“I just love the energy and creativity that Jeff brings to everything he does, not just in his performing, but in all of his work. So, this concert was the embodiment of all those things,” Mandat said.

Mandat was also one of the founding members of the festival and still believes it’s good to have events that can excite even longtime musicians with new types of music.

“Having all these wonderful guests bring their perspectives and excite everybody into the possibilities of music is just great,” Mandat said. “In its earliest years, it was very immersive with two full weeks of events all day and evening. Now there are more highlight concerts and it’s about eight or nine days, but the span is still pretty long and it’s great that’s stayed the same.”

The final performance of the 2022 Outside the Box Festival took place on Saturday, March 28 and featured a collection of faculty and guest-composed music played by the Altgeld Chamber Players playing contemporary chamber music and electronics. The festival is expected to continue next spring with a new set of ensembles and guest performances..

“I think the excitement of experiencing something for the first time and not being able to compare with your preconceived notions allows us the opportunity to have great open hearts when the music is coming at us, Mandat said. “I feel like we absorb it differently, and in my opinion, better when we don’t have those notions about the music and it hits us right in the gut. It’s an experience you can’t get any other way than being in person to feel it.”

Kaiser said being able to incorporate technology into music allows for more dynamic performances that can bring a degree of spontaneity to music in a similar way to how multiple human performers can do the same.

“It becomes a big feedback cycle,” Kaiser said. “I was interacting with a technology that plays something and I’m playing it in another way. That’s, for me, the joy of being surprised by what technology can do. Much like the human player, the technological player brings these joyful surprises.”