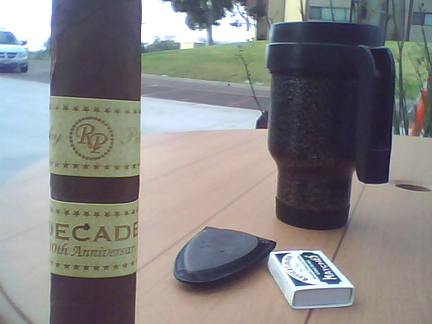 A busy weekend, I performed with Scott Walton Saturday night at Cuyamaca College’s fantastic new theater. The concert was part of their piano series. Many of you just know Scott as a bassist, but he earned his doctorate in piano performance. After he performed Crumb, Debussy, Chopin and others, we improvised for a while. It was a blast…

Then today, I performed with Mark Dresser‘s telematic ensemble. The performance took place online, via high speed internet, with Mark’s group at UCSD’s CRCA building, an ensemble led by Sarah Weaver at Rensselaer Polytechnic Institute, and one led by Chris Chafe at Stanford. The performance was viewed by live audience at each venue on multiple video screens, and also online. A very interesting experience featuring a group of compositions commissioned by Pauline Oliveras’s Deep Listening Institute. Also a blast.

Afterwards, I enjoyed a lovely Rocky Patel Decade Toro, a wonderful cigar with a grand version of that archetypal Rocky Patel flavor…highly recommended.

You can listen to Rocky talk about it here: