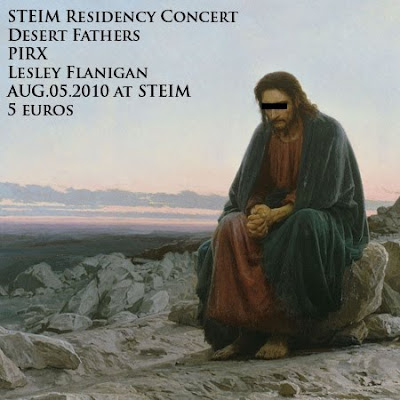 We return from our summer break with concerts by two residency projects and one touring artist. Electro acoustic trumpeter Jeff Kaiser returns for a 2 week residency with Max/MSP guru Gregory Taylor. Also returning is our favorite group and organizers from Cologne; PIRX locking themselves up in our studios to work on new album material like last time. We are also very happy to have New York based artist Lesley Flanigan who is currently a resident artist at Worm Rotterdam and will show her work Amplifications for voice and handmade instrument. Hope to see you there!

Gregory Taylor
Gregory Taylor is a product of his age – one of that generation of visual artists who discovered that the process of using the recording studio as a compositional tool was more personally rewarding than waiting for the paint to dry and opted for a life creating imaginary cultural artifacts of an audible nature. He has studied central Javanese gamelan and electroacoustic music in the U.S. (Cornell, UW-Madison, New England Conservatory) and the Netherlands (Instituut voor Sonologie), written for publications such as Wired, Recording, Array, and Option, and hosted a radio program of contemporary audio on WORT-FM since 1986 (http://www.rtqe.net/RTQE.html).

He was active in the 1980s in the cassette culture movement, producing several solo recordings during the period (Given Names [1983], The Logic of Possible Worlds [1984], Interregnum [1986], Virtual Terrain [1987], What the Thunder Wrote [1988]) as well as running the Art Level recording label and curating a number of USENET compilations. After a hiatus from performing and releasing music during the 1990s to pursue more formal musical studies, he returned to regular recording and live performances as an improviser in both solo and group contexts in the late 1990s. His solo recordings are available on the c74, Palace of Lights, Flood, and Stasisfield labels and online (http://www.rtqe.net/downloads.html).

In addition to his work with Jeff Kaiser in the Desert Fathers, he has remixed and collaborated with a diverse group of artists (Kim Cascone, BMB.com, Scott Fields, The Yearlings and K. Leimer), performs as an active member of PGT (a dual-laptop and acoustic mandolin trio with Brad Garton and Terry Pender), “the trio” (with percussionist Tom Hamer and visualist Mark Henrickson), and pursues an active solo performing career.

He works for the new media software company Cycling ’74 on documentation, plug-in development, and content and curricular development. He is in demand as a workshop facilitator and educator.

Jeff Kaiser
Jeff Kaiser is a trumpet player, composer, conductor, and music technologist living in La Jolla, California.
While maintaining an active professional career, Jeff is also a music PhD student in Integrative Studies at the University of California, San Diego. Focusing on improvisation and emergent technology, Jeff has a primary specialty of critical studies and secondary of ethnomusicology. Jeff also holds a Bachelor’s Degree in Music Composition and a Master of Music in Choral and Orchestral Conducting.

Jeff has played professionally with many different groups and individuals on television, film, radio, and in concert halls throughout the United States and abroad. Artists he has played with include Michael Moore, Michael Vatcher, Eugene Chadbourne, Michael Vlatkovich, Brad Dutz, Jim Connolly, The Motor Totemist Guild, Headless Household, The Vinny Golia Large Ensemble, The Los Angeles Trumpet Quartet, The Kreative Orchestra of Los Angeles, as well as his own ensembles including his large group The Jeff Kaiser Ockodektet, The Choir Boys (with Andrew Pask), The Desert Fathers (with Gregory Taylor), KaiBorg (with David Borgo), his duo with Tom McNalley (ZUGZWANG) which played at the Festival of New Trumpet (FONT) in New York and his duo Pi with Phil Skaller has played at the Vision Festival in New York (improvising to a film collaboration by Bill Brand). Television trumpet performance credits include the HBO series Deadwood. Film performances include The Cave. He has released sixteen CDs as leader/co-leader and has appeared on many others.

He is the recipient of numerous grants, honors and awards, most recently the Freida Daum Urey Academic Fellowship and the Jimmy Cheatham Jazz Scholarship award. An active member of the artist community in Ventura, California before moving to La Jolla, he is a fourteen-time recipient of the Individual Artist Fellowship from the City of Ventura (beginning in 1990) and a three-time recipient of the Forum of the Arts Grant administered by the Ventura County Museum of History and Art. He is also the recipient of nine ASCAP Plus Awards. In addition to the awards, he has received critical praise in the Los Angeles Times, Cadence Magazine, The Wire, Signal-to-Noise, L.A. Weekly and numerous other print and web publications throughout the world.

He is also the founder and owner of the pfMENTUM record label and Angry Vegan Records, both currently growing stronger and adding to their catalogs regularly.

He has taught master classes, coached brass, led seminars, and been a guest lecturer at numerous universities, colleges, high schools, and middle schools including visiting artist/lecturer positions at Roosevelt University (Chicago, Illinois), Westmont College (Santa Barbara, CA), California Institute of the Arts (Valencia, CA), the University of Gothenburg (Gothenburg, Sweden) and California Lutheran University (Thousand Oaks, CA). He has taught workshops at various other locations including the Museum of Contemporary Art (San Diego, CA). Recently, he has completed residencies at STEIM, developing spatialization software for solo trumpet and with the duo KaiBorg.
(https://jeffkaiser.com/)

PIRX
PIRX with Marion Wörle aka Frau W (Laptop) and Maciej Sledziecki (Guitar) uses the vocabulary of sound-art as it does elements from psychedelia, noise and Krautrock. The electronic music of the 90s and 2000s is also bursting through every crack of their music. Refreshingly non-academic and equipped with a fine sense of humor they bring great diversity to the day. In 2008, they released their critically acclaimed debut album Deleted Scenes, which was recorded at STEIM.
(http://www.satelita.de/index.php?PIRX)
(http://www.myspace.com/pirxband)
—————————————————–

Lesley Flanigan
Lesley Flanigan is a New York-based sound sculptor, composer, vocalist, and performer. Inspired by the physical materiality of sound, she focuses on amplification itself as the subject of her performances, which weave sound from her voice with hand-built feedback electronics.

Her work with speaker feedback explores the physical acoustics of electronic sound by turning basic loudspeakers into musical instruments. ArtsCriticATL writes, “Flanigan’s performance comes loaded with philosophical ideas, often blurring the boundaries among music, noise, sculpture and performance art.” Crafted from found speaker components and wood, her instruments afford a delicate tangibility to electronic sound. Drawing from her background in sculpture and music, she layers waves of tones from her speakers with her own voice, shaping sound as a fragile mass.

Her feedback compositions are the subject of her 2009 album, “Amplifications”, using only the sounds of her voice and speaker instruments. With influences ranging from post-rock and jazz to ambient and noise genres, her music combines a classical approach to composition with an appreciation for the art of melody and song. Music from the album formed the basis for a series of performances around the USA, including The Stone, Gray Area Foundation for the Arts, Galapagos Art Space, Wellesley College and Crane Arts.

In addition to her solo work, Lesley Flanigan also performs as a member of Bioluminescence, a collaboration with video artist and composer R. Luke DuBois. Exploring the modality of human voice, DuBois records and rearranges Flanigan’s voice and image in real time to shape an immersive environment of video and sound. She has wielded a soldering iron as a guest performer in the circuit constructing noise group, the Loud Objects. She continues to sing in the contemporary music scene, recently as a soprano in Tristan Perich’s “Lit”.

Her work has been presented in numerous venues, festivals, and art spaces including the Solomon R. Guggenheim Museum (New York), Issue Project Room (Brooklyn), Sonar (’10 Barcelona), Transitio_MX (’09, Mexico City), NIME (’08 Genoa; ’09 Pittsburgh), ICMC (’07, Copenhagen), and Bent (’08 Los Angeles; ’09 New York). Her art has been exhibited at the ISEA conference in Singapore, Busan International Design Festival in South Korea, Ringling College’s Selby Gallery and MCLA’s Gallery 51. She has spoken about her work and given workshops at universities, art foundations, and hacker spaces around the country including Harvestworks, Dorkbot NYC, Art Institute of Chicago, Wellesley College and Noisebridge.

Lesley Flanigan studied sculpture at the Ringling College of Art and Design, and received a masters in media technology from the Interactive Telecommunications Program (ITP) at New York University.