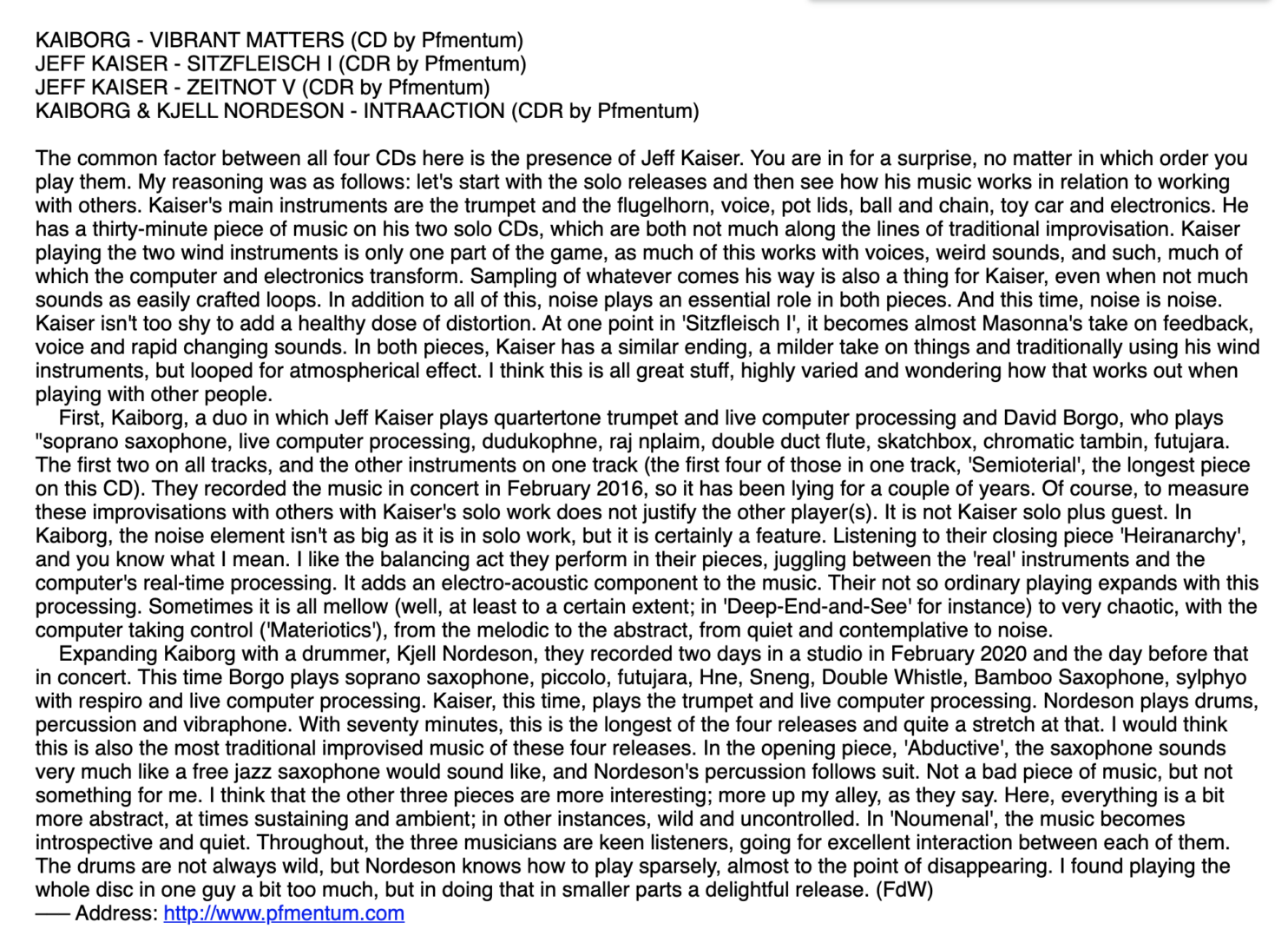 The common factor between all four CDs here is the presence of Jeff Kaiser. You are in for a surprise, no matter in which order you play them. My reasoning was as follows: let’s start with the solo releases and then see how his music works in relation to working with others. Kaiser’s main instruments are the trumpet and the flugelhorn, voice, pot lids, ball and chain, toy car and electronics. He has a thirty-minute piece of music on his two solo CDs, which are both not much along the lines of traditional improvisation. Kaiser playing the two wind instruments is only one part of the game, as much of this works with voices, weird sounds, and such, much of which the computer and electronics transform. Sampling of whatever comes his way is also a thing for Kaiser, even when not much sounds as easily crafted loops. In addition to all of this, noise plays an essential role in both pieces. And this time, noise is noise. Kaiser isn’t too shy to add a healthy dose of distortion. At one point in ‘Sitzfleisch I’, it becomes almost Masonna’s take on feedback, voice and rapid changing sounds. In both pieces, Kaiser has a similar ending, a milder take on things and traditionally using his wind instruments, but looped for atmospherical effect. I think this is all great stuff, highly varied and wondering how that works out when playing with other people.

First, Kaiborg, a duo in which Jeff Kaiser plays quartertone trumpet and live computer processing and David Borgo, who plays “soprano saxophone, live computer processing, dudukophne, raj nplaim, double duct flute, skatchbox, chromatic tambin, futujara. The first two on all tracks, and the other instruments on one track (the first four of those in one track, ‘Semioterial’, the longest piece on this CD). They recorded the music in concert in February 2016, so it has been lying for a couple of years. Of course, to measure these improvisations with others with Kaiser’s solo work does not justify the other player(s). It is not Kaiser solo plus guest. In Kaiborg, the noise element isn’t as big as it is in solo work, but it is certainly a feature. Listening to their closing piece ‘Heiranarchy’, and you know what I mean. I like the balancing act they perform in their pieces, juggling between the ‘real’ instruments and the computer’s real-time processing. It adds an electro-acoustic component to the music. Their not so ordinary playing expands with this processing. Sometimes it is all mellow (well, at least to a certain extent; in ‘Deep-End-and-See’ for instance) to very chaotic, with the computer taking control (‘Materiotics’), from the melodic to the abstract, from quiet and contemplative to noise.

Expanding Kaiborg with a drummer, Kjell Nordeson, they recorded two days in a studio in February 2020 and the day before that in concert. This time Borgo plays soprano saxophone, piccolo, futujara, Hne, Sneng, Double Whistle, Bamboo Saxophone, sylphyo with respiro and live computer processing. Kaiser, this time, plays the trumpet and live computer processing. Nordeson plays drums, percussion and vibraphone. With seventy minutes, this is the longest of the four releases and quite a stretch at that. I would think this is also the most traditional improvised music of these four releases. In the opening piece, ‘Abductive’, the saxophone sounds very much like a free jazz saxophone would sound like, and Nordeson’s percussion follows suit. Not a bad piece of music, but not something for me. I think that the other three pieces are more interesting; more up my alley, as they say. Here, everything is a bit more abstract, at times sustaining and ambient; in other instances, wild and uncontrolled. In ‘Noumenal’, the music becomes introspective and quiet. Throughout, the three musicians are keen listeners, going for excellent interaction between each of them. The drums are not always wild, but Nordeson knows how to play sparsely, almost to the point of disappearing. I found playing the whole disc in one guy a bit too much, but in doing that in smaller parts a delightful release. (FdW)
––– Address: http://www.pfmentum.com