Well, after one quarter of graduate school I look crazy pretentious like this: 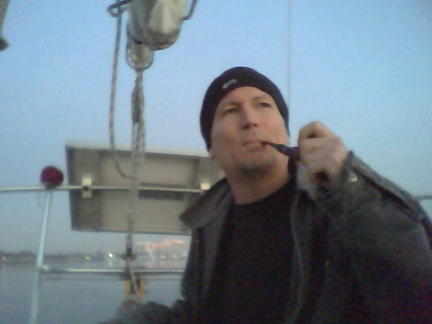 Out sailing off the coast of San Diego with Jim Connolly on his sailboat and he snapped that pic of me while I was manning the tiller…it was a blast, makes me want to get a boat…..

I think that photo is hilarious. Don’t worry, I’m still the same guy on the inside, but suit jackets with turtlenecks aren’t far behind. Maybe a well-trimmed full beard. And a beret. That photo will be on the cover of my new book “Memoirs of a Dishwasher” and mocked by my pal Kris Tiner for a long time…”Ceci n’est pas une pipe?”

Wonderful first quarter, school was great, but also the non-school stuff. I met George Lewis and heard him lecture…played gigs and presented papers (University of Wisconsin, Madison…presented to the wonderful musician Stephen Dembski’s class, also played and presented at ISIM held at Northwestern University in Evanston, IL). AND a wonderful gig in Eugene, OR in December with the killer improviser Sabrina Siegel.

This quarter, in addition to my coursework, I will be playing and presenting in Minneapolis (at the University of Minnesota) as a member of Guerino Mazzola’s Quartet with Heinz Geisser and Sirone.

I will also be in Philadelphia and New York performing and recording with my friend David Bartel, a Max/MSP head who plays drumset as well.

Looking forward to it all….